How to get to Boulevard Haussmann

Visiting Boulevard Haussmann is very easy as it is right in the heart of the modern city of Paris.  Stretching from the 8th through to the 9th there are several Metro and RER stops, as well as bus routes, which join to other parts of the city.

It is about about 30km from Charles de Gaulle Airport and driving may take almost an hour.  So if you are arriving by plane and wish to come straight here, perhaps you have a hotel on the boulevard, then a taxi is a convenient but not particularly cheap or fast solution.  The taxi cost will be about 40 Euros, up to 50 Euros if there is traffic.

A better solution for budget conscious travelers will be to take the train.  There is an SNCF station at the airport, you can follow the signs which say in English "Paris by Train", and tickets are available from blue ticket machines or from ticket windows.

The train will take you to the Gare du Nord, and from there it will be metro to here.  See directions below for that part of the trip.

If you are arriving on the Eurostar from London, or flying in and have taken the train from the airport as suggested above, then you will be at the Gare du Nord - the "Northern station" of paris.

This is of course a major interchange location and there are a number of possible routes.  The most direct, avoiding train changes, is to use the RER line E.  This is the suburban or local train system which, here inside the city center, is mostly underground and operates similarly to the Metro.

The RER station is well signposted in Gare du Nord, and you can go to the platform for line E in a few minutes.  The trains run about every 15 minutes and will take less than half an hour to reach Haussmann - Saint-Lazare station, which, despite it's name, is not actually on Blvd Haussmann, but is very close by.

If you are comfortable with the Metro system though it is more straight forward to take the metro line 4 from Gare du Nord southwards 3 stops, changing at Strasbourg - Saint-Denis, and then the Metro line 9 west which goes under most of the boulevard and hence gives you several choices of good stations to alight depending on exactly where on the road you need to go.  See the metro stations page for more discussion of that.

Lastly there is a perfectly good local bus service available from the bus stop outside the station.  Look for bus number 48 which can take you all the way to Richelieu - Drouot in only about 10 minutes.

From the Eifel Tower

Been sightseeing and now need to go back to your hotel here are do some shopping in Galeries Lafayett?

It isn't that far,. but you do have to cross the river and if you choose to take the bus number 42 it may be half an hour. Alternatively the metro is always a good option. Take line 6 from Grenelle as far as La Motte, then changing to line 8 and going as far as Richelieu-Drouot.  This may be faster but will still be at least 20 minutes. 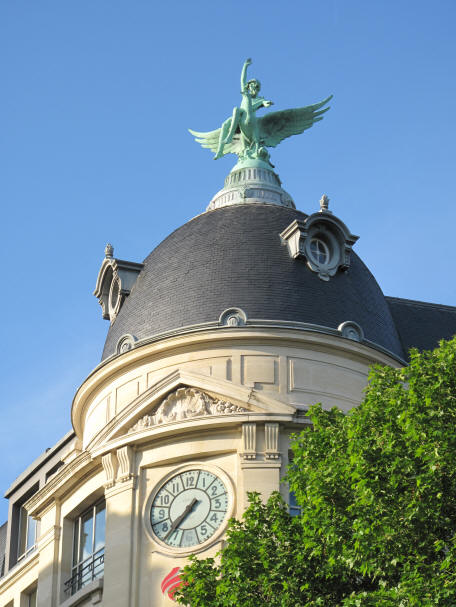